The Democratic Republic of Congo has been laden with so much bad publicity over the years due to its tumultuous past. However, not only is this country rich bearing over 250 minerals but also natural wonders full of exhilarating experiences that would suffice as travel bucket list items.

DRC is home to Mt. Nyiragongo, the world’s most volatile volcanoes that pose an existential threat. Mt. Nyiragongo located inside the Virunga National Park stands at 3,470 meters above sea level and has the world’s largest lava lake on its summit (1.2km diameter).  This stratovolcano mountain has erupted approximately 35 times since 1882, near Lake Kivu on the eastern border of DRC and with Rwanda in the Virunga National Park.

The Nyiragongo volcano trek is divided into five sections, with a 15-minute break at each stop. Hikers commence the ascent at the Kibati Ranger Post at an altitude of 1994m and reach the summit at 3,470m, with a 6.5km hike each way. The average climbing time is between 4 and 6 hours, with the descent of the volcano taking around 4 hours. Times are dependent on group speed and agility as the slowest person on the trek sets the pace.

Last year December, Our Head of Sales at the Goma Serena Hotel, Huguette issued a challenge to Geoffrey, the Rooms Division Manager to take up an experience that would push him to his limits. And since Geoffrey was always ready for whatever challenge that would have been thrown to him, he was presented with an opportunity to hike Mt. Nyiragongo. He was to be accompanied by Narcia, the Sales Executive, who was to carry him down should he fail along the way.

D-Day was 24th January 2021. On this chilly morning, Geoffrey and Narcia passed by Goma Serena Hotel’s Rumoka Restaurant where Chef Dismas prepared for them to take away picnic boxes for the hike.

As a standard procedure whilst departing for the hike from the Goma Serena Hotel, the concierge took them through last-minute checks to ensure they had everything ready in preparation for the hike. This included comfortable hiking shoes, backpacks that contained a sleeping bag, waterproof clothing, extra dry clothes, and 2 liters of water. Once everything was ready they made their way to the starting point at Kibati Rangers Point at 1994m.

At this point, a group of 16 hikers assembled for a pre-hike brief of all the safety measures as well as prepare them psychologically of what was ahead of them. They hired a porter who would accompany them and help them carry all their items for $ 25.00 and also bought walking sticks for $5 per stick.

In the beginning, the hike was gloomy as everyone was lost in thought. However, after half an hour, the group broke the ice as they all were eager to achieve a common goal- to get to the top. The ranger ensured that the group all walked and kept the same pace.

The first section of the trek took them through the dense forest at the base of Mt. Nyiragongo. Here, the forest canopy was punctured by sounds of the forest, singing birds, distant laughter of chimpanzees, and whistling winds. The rangers pointed out different plants and their uses and it was a lot of fun for them to pick and eat wild strawberries as they walked. The terrain was largely made of red soil, here they were cautioned to look out for wildlife, including monkeys and bushbucks. The team was lucky to sight a giant rhinoceros chameleon.

After one hour, the team made their first stop. At this point, the rangers encouraged them to take a lot of water. 5 minutes later, they were on their way. Here they noticed that the terrain changed to lava.  In 2002, a stream of lava burst from the side of the volcano swept through where they stood and coated Goma in a layer of volcanic rock.  A better part of the city is still covered in this rubble, and lava has been part of Goma ever since.

Trekking at this point became a little harder and the group started separating but in a tactful manner, the rangers ensured no one was left behind. The group reached the 2nd section of the hike at 2525m where they had lunch. Thereafter, they proceeded to the 3rd section of the hike. During this time, the clouds looked heavy but they were assured the rain would pass. Soon after, the corner view of the mountain was visible although they still had not arrived.

One hour and a half later, they arrived at section 3 of the hike at 2755m. Fatigue had set in for most of them. Additionally, the weather and temperature had drastically changed to a chilly windy. It became windy and cold for everyone to even keep up with chit chat.  The terrain had become tougher and vegetation sparser.

An hour later, they made it to the 4th section of the hike at 3235m. The imposing mountain was now visible and the vegetation was almost non-existent and the ground almost pure rock. They were now 250m away from the summit of Mt. Nyiragongo. However, the gradient had changed to almost 60 degrees, the air was thinner and the cold wind much stronger. By this time, every one of them was extremely tired despite the mere fact that it would be less than an hour to get to the top. This was a true testament of endurance and took Geoffrey and the team every ounce of strength to move an inch.

They eventually made it! The rangers were so accustomed to the hike thus; they were poised throughout the journey. They cheered them on upon arrival at the top and directed them to the viewing point. The view was most stunning and as saying goes, a thousand words can’t describe the clear view of the boiling lava lake with an adjacent small crater that was shooting billows of fire with a thunderous sound.

They enjoyed a steaming cup of hot tea and after dinner, they went back to the viewing point, where they enjoyed the amazing views of rising smoke, billowing fires and shooting flames. It was truly a sight to behold. The climb was worth every minute.

By 2000hrs, temperatures had dropped to around 7 degrees and the rangers advised them to turn in to rest in preparation for an early morning. Everyone vanished into their cabins. No one had prepared them for the strong winds and billowing crater that sounded like hundreds of crashing helicopters. Nonetheless, they became accustomed to the sounds and with the fatigue, it was easy to fall asleep.

At 0400Hrs everyone was woken up to make way to the viewing point. The lava lake boiled on, spitting flames of fire into the distant darkness. By 0530 hours, the sun popped from behind the hills of Rwanda. The yellow sun rays against the red heat by the lava lake formed an artistic sight that will forever be etched in Geoffrey’s mind.

The team had a quick breakfast and began the descent which took them only 4 hours. They were all excited of the achievement they made and took pictures to commemorate this magical experience.

Warm Sleeping Bag-available for hire at Goma Serena Hotel for $ 30.00

Life is not a journey to the grave with the intention of arriving safely in a pretty and well-preserved body; but rather to skid in broadside, thoroughly used up, totally worn out, and loudly proclaiming “WOW – What a Ride!”- Anonymous 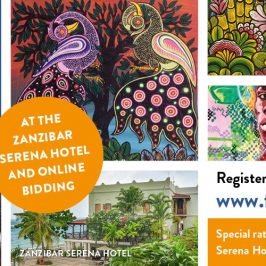 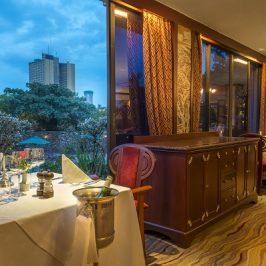 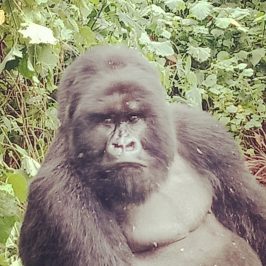